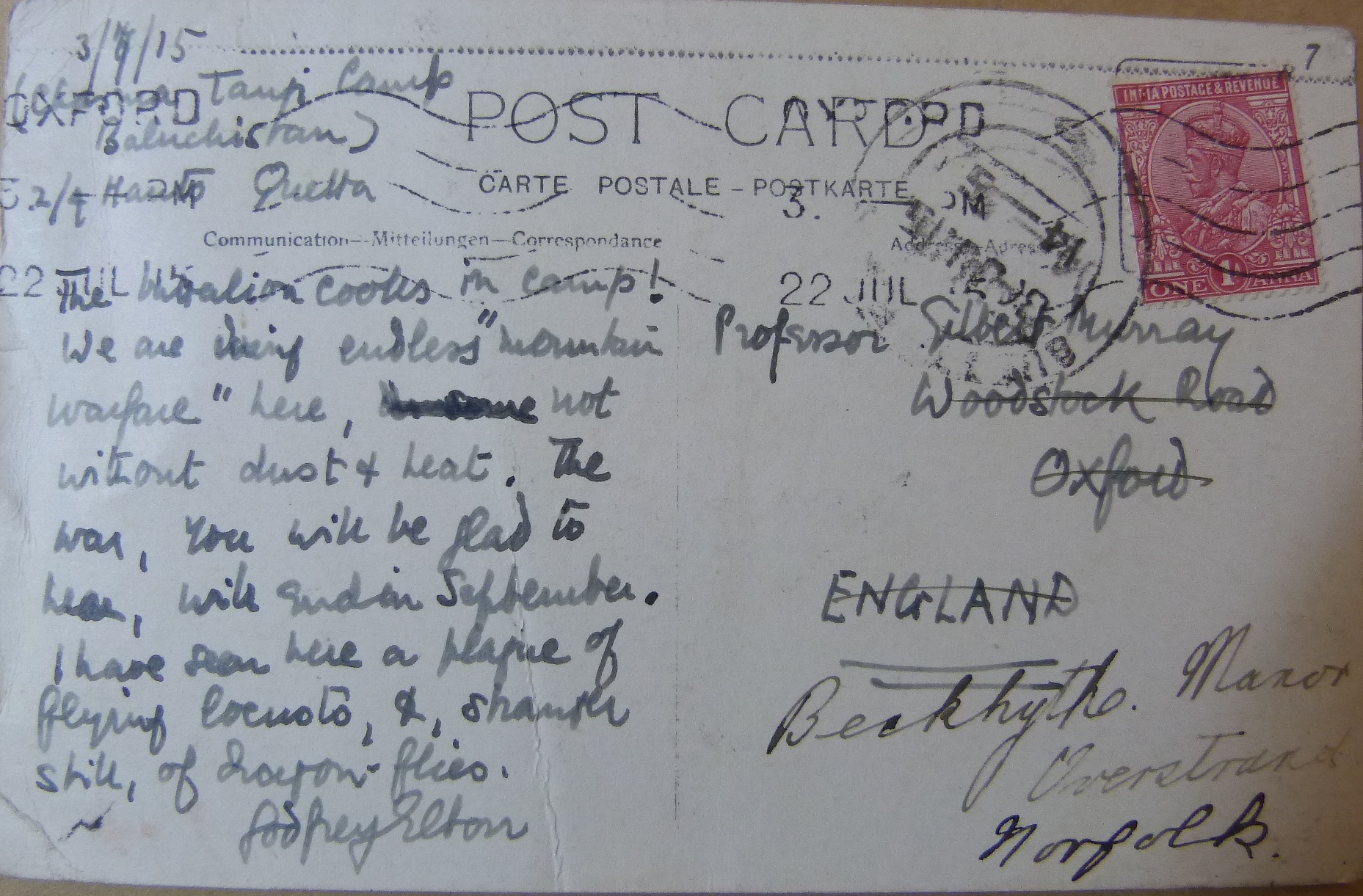 Thanks to Katie Longo for an excellent talk about the Gilbert Murray papers and the Great War on Friday 18 May. It was good to see the room packed with academics, students and library staff. It was particularly pleasing to have Gilbert Murray’s grandson in attendance as he was able to add some fascinating insights.

Can we conceive anything more distant in its intents from war than academic life? As Vera Brittain magnificently wrote in her unforgettable recollection of the wartime, Testament of Youth, Oxford symbolises all that is quintessentially against war: knowledge, study, serenity of mind, devotion. Nonetheless, as Brittain’s experience shows, college life and intellectual withdrawal were not to be spared. 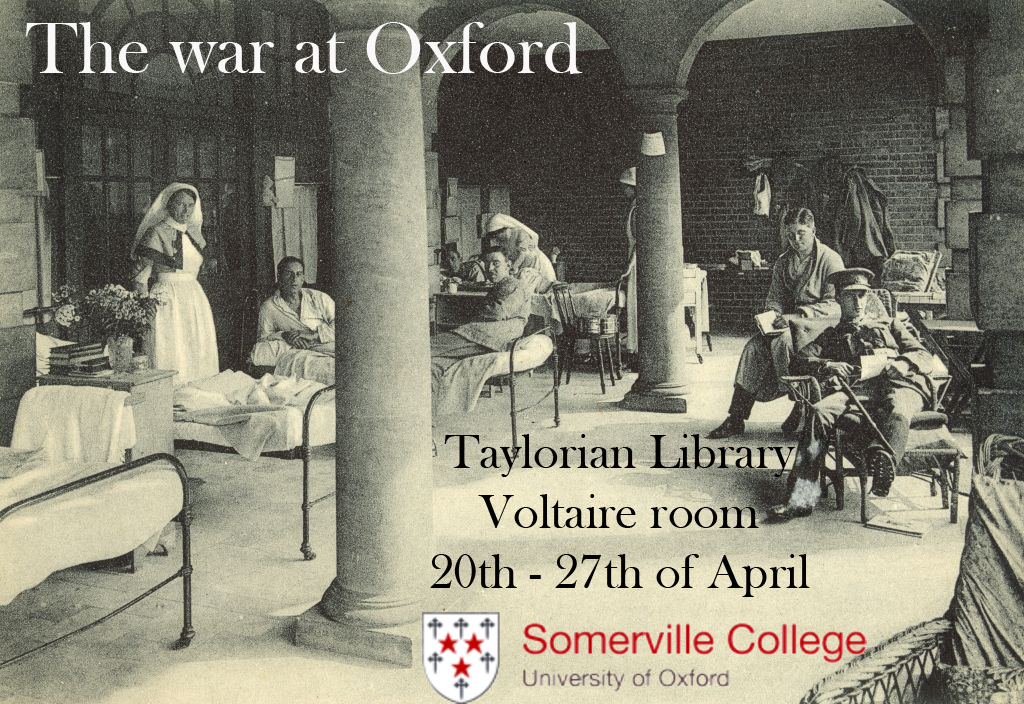 Made possible by the kind permission of Somerville College and the Taylorian Library, the exhibition, The War at Oxford, displayed war’s disruptive impact on academia, but also the efforts towards reconstruction and the preservation of humanistic values. Originally conceived to serve as an additional insight to a conference on the Great War in Italy (The Great War in Italy. Representation and Interpretation), it offered the opportunity of enlarging the critical framework, linking the two allied nations’ war experience together, and comparing some outputs of the most representative pro-war Italian cultural movement – the Futurism avant-garde – with the Oxford own response to war, and some significant testimonies.

Famous as Vera Brittain’s college and directly affected by war, the Somerville archive provided most of the materials, making it possible to trace back the exceptional story of its conversion into a military hospital from 1915 to the end of the war. Over all, more than 70 items were displayed, accounting for three main sections. The first one included pictures of the college occupied by the convalescing soldiers, original documents about its handover to the war office as well as other private records, donated to the college long afterwards; the second section was devoted entirely to Vera Brittain’s life, starting from her courageous decision to become a nurse, through to her pacifist commitment as a writer. Some of her major works on war were, consequently, put on show; including some originals of her famous Letters to the Peace-Lovers and her war poems as they first appeared on the current war and post-war issues of the university Oxford Poetry magazine, together with those of other famous contributors (e. g. Robert Graves, Winifred Holtby). Finally, the last section, with its rare and precious books on Futurism owned by the Taylorian library, moved as far as to Italy, allowing the visitor not only to get a sense of the strength of Italian propaganda for interventionism – and the direct influence literature was able to shed on the life of thousands of soldiers – but also to appreciate the novelty and the artistic conception laying behind the realization of each of them.

On Friday 18 May Katie Longo (Balliol College, Oxford) will give a talk, Towards the Great War Centenary: selections for an exhibition (1:00 pm, Seminar Room, Pitt Rivers Museum – see the CSB Calendar). This is also an opportunity to hear about plans for the Bodleian’s 2014 exhibition.

Katie was appointed to this year’s Balliol-Bodley Scholarship, which affords Balliol postgraduates the opportunity to work with Western MSS. in the Bodleian Library in support of cataloguing or curatorial research. With the 2014 exhibition in mind, Katie has been exploring the papers of Gilbert Murray (1866-1957), Regius Professor of Greek at Oxford. Murray is a good starting point for asking certain questions about contemporary perceptions of the Great War. He is well known for his association with conscientious objectors and with the foundation of the League of Nations; and yet in 1914 he wrote a pamphlet justifying the British war position. Katie has been surveying the Murray papers, concentrating on the early part of the war, with several questions in mind. What is his general attitude to the war? Does he have a realistic understanding (in terms of the scale, duration, likely losses, strategy etc.)?  What is the source of his information (official sources, friends, newspapers, propaganda, soldiers at the front etc.)? What is his attitude to Germany and the Germans?

Over the course of the next few months I will be surveying some of the major archives of Oxford alumni, politicians, academics, writers, soldiers and others held in the Bodleian and elsewhere in the University, to ask such questions, and to find out what impact the war had on these individuals and their circles. Do their views change as the war develops, especially after the Somme in 1916, Passchendaele in 1917, and the German breakthrough in the Spring of 1918?  How do they react to the armistice in November 1918 – is there a sense of victory, a feeling that the war was worthwhile, or that it was futile? I hope to gain a sense of what the war meant to them as it happened, when none of them had the benefit of hindsight or any foreknowledge of how the post-war world would unfold.