Image of the plaque on Pentire Point, north Cornwall, UK commemorating the composition of the poem ‘For The Fallen’

By Robin Darwall-Smith Written for the the Oxford Bach Choir members’ bulletin and reproduced here with kind permission.

In a year that marks the centenary of the outbreak of the First World War, the Oxford Bach Choir is performing Elgar’s own reflection on that conflict, his great choral work The Spirit of England. Its title may have led people to fear an ephemeral piece of jingoist flagwaving, but the truth is very different. I will stick my neck out here and say that I think that The Spirit of England is one of Elgar’s greatest works in any genre, and I hope that all of you, whether or not you already love Elgar’s music, will find that you are in for a special musical experience.

Spirit of England is an unusual work in that both words and music were written the middle of a war, and it lets us into the emotions felt by Britons on the home front, impotent to do anything, fearful of loved ones, uncertain of the future, and yet hopeful of eventual victory. One important thing to bear in mind is that, in early performances of this piece, every member of the choir, orchestra, and audience will have known someone close to them who was serving in the armed forces, and, especially in the latter days of the war, most of them will have known someone who had been killed.

Soon after the outbreak of war, the poet Laurence Binyon published in the Times a series of poems reflecting on the conflict. At a time when many assumed that the war would be over by Christmas, Binyon showed a prescient awareness that it would be more serious than that. As early as 21 September 1914 there appeared his poem, For the Fallen, which includes these famous lines:

They shall not grow not old, as we that are left grow old;
Age shall not weary them, not the year condemn.
At the going down of the sun and in the morning
We will remember them.

In December 1914, Binyon published his war poems as a collection called The Winnowing Fan, which became immensely popular: in January 1915, one of Elgar’s friends wrote to him “Why don’t you do a wonderful Requiem for the slain—something in the spirit of Binyon’s For the Fallen?”

Elgar therefore set to work. He selected three poems from The Winnowing Fan out of which to create a halfhour cantata which would chart the emotional journey of the war to date. We therefore start with The Fourth of August, which represents the excitement and apprehension which greeted the outbreak of hostilities. The other two poems swiftly leave that world behind to consider the emotional cost of war. To Women reflects on the feelings of women with loved ones serving on the front, and their uncertainties and fears, while For the Fallen, the longest movement of the three, is a great elegy to the dead themselves.

In May 1916 that the second and third movements were released for performance, but not the first movement. Interestingly, the most optimistic of the poems was also the one that caused him most trouble. In particular Elgar could not bring himself to set a verse in which Binyon described the Germans thus:

She fights the fraud that feeds desire on
Lies, in a lust to enslave or kill,
The barren creed of blood and iron,
Vampire of Europe’s wasted will.

Elgar, like many Britons, was steeped in German culture. His own music owed a great deal to German influence, and he had visited Germany regularly. He had also been encouraged and helped by many Austro- German musicians. It was, at least early on, impossible for Elgar to demonise a nation which he had loved so well.

By early 1917, however, after three increasingly terrible years of war, Elgar’s mood had changed. He now came up with an extraordinary solution to his problem: he based his setting of these words around the music of the Demons’ Chorus from The Dream of Gerontius. He explained his reasons for doing this in a letter:

“Two years ago I held over that section hoping that some trace of manly spirit would shew itself in the direction of German affairs: that hope is gone forever & the Hun is branded as less than a beast … I would not invent anything low & bestial enough to illustrate the one stanza: the Cardinal [Newman] invented … that particular hell in Gerontius where the great intellects gibber & snarl knowing they have fallen. That is exactly the case with the Germans now:—the music was to hand & I have sparingly used it. … The horror of the fallen intellect—knowing what is once was & knowing what it has become—is beyond words frightful.”

In fact the overwhelming mood of The Spirit of England, especially in its second and third movements, is one of a deep compassion in the face of unimaginable losses and suffering, and there is very little militarism about it. In the third movement, when Binyon imagines fallen warriors as they marched off to war “open-eyed and unafraid”, Elgar certainly sets these words to a march, but it is an eerie and ghostly episode. Instead the emotional core of the work is at the end when Binyon compares our memories of the fallen to the stars above, and Elgar rises to a deeply moving and ecstatic climax (sufficiently ecstatic for Elgar to give the first altos a top G sharp at its height: you have been warned), before dying away to nothing.

The Spirit of England made a deep impression on contemporary listeners. The poet Robert Nicholls, who had been wounded in the war, in a letter to a friend, damned “all the people writing about war & soldiers when they haven’t a notion of either. Sensible people like Yeats keep quiet, or express the feelings of noncombatants in the most touching & poignant forms imaginable as Elgar & Binyon. How often the sad last phrases of Elgar’s “For the Fallen” echo despondingly & yet somehow victoriously in my head!”

The Spirit of England ends quietly and uncertainly: a reflection of Britain’s mood in the middle of the war. Even after the war, however, Elgar was in no mood to celebrate. Laurence Binyon wrote an Ode to Peace, which he invited Elgar to set, but Elgar was not interested; instead he wrote the Cello Concerto.

I’ll leave the last word on The Spirit of England to another great composer who wrote a masterpiece inspired by the First World War. In 1969, Benjamin Britten planned to perform For the Fallen at the Aldeburgh Festival. Here is what the composer of the War Requiem made of Elgar’s music:

It has always seemed to me to have in its opening bars a personal tenderness and grief, in the grotesque march an agony of distortion, and in the final sequences a ring of genuine splendour.

The Oxford Bach Choir performance of The Spirit of England will take place in the Sheldonian Theatre, Oxford on Dec 6, 2014.

Several recordings of The Spirit of England can be found, for example on YouTube.

More information about the composer Edward Elgar, the poet Laurence Binyon  and his Ode of Remembrance can be found in Wikipedia. 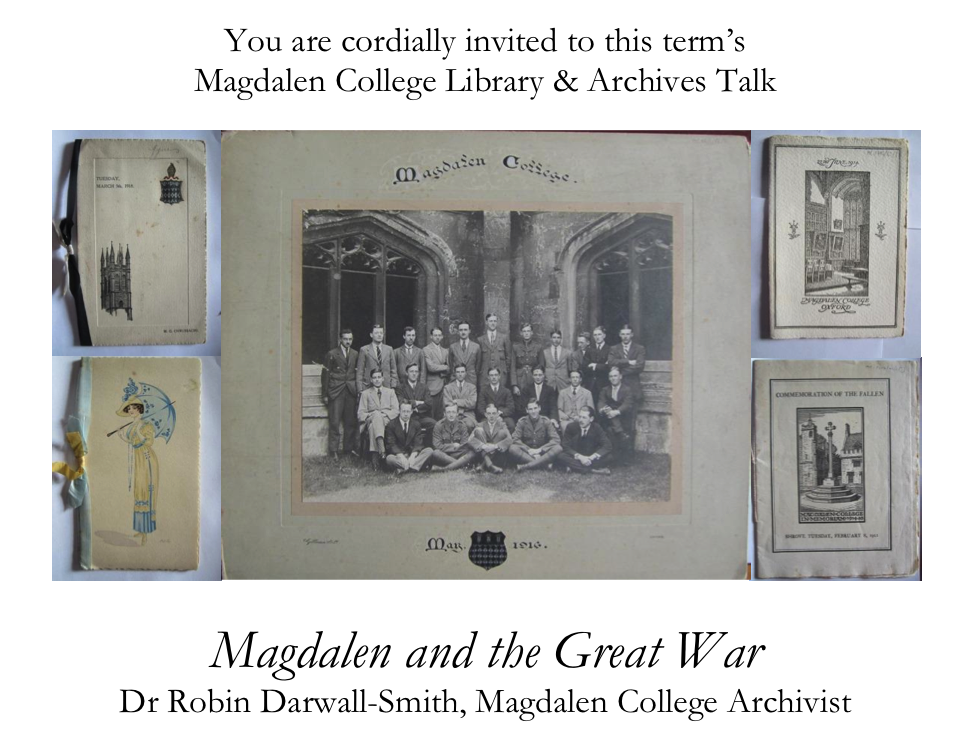 This term’s Magdalen College Library & Archives Talk will feature Dr Robin Darwall-Smith, Magdalen College Archivist, talking about ‘Magdalen and the Great War’.
Robin will discuss the impact of the First World War on Magdalen
College, and among the themes he will consider are: the College in the summer of 1914; how Magdalen functioned during the war and who was there during this time; what happened to its members on the front; and how the College chose to remember the war afterwards.

Including a chance to see a related exhibition in our Old Library, which was curated by Robin and our Archives Assistant, Ben Taylor.