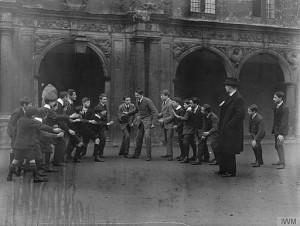 Belgian boys during their play hour in the quadrant of St John’s College, Oxford University, where they are being educated by Belgian schoolmasters. By Nicholls, Horace (Photographer) [Public domain], via Wikimedia Commons

Oxford Images of World War 1 invites volunteers age 16-15 to turn the clock back 100 years and imagine what life was like for young people in the city and county during the Great War. The outcome will lead to a major outdoor photographic exhibition at the Oxford Castle Quarter in May 2016.

Saturday 7th November 2015 marked the start of our journey on this exciting project. Falling on the same weekend as Remembrance Sunday this felt like an appropriate starting point for reflecting on the past. We had a great panel of speakers who kindly offered their knowledge and expertise to the project. Lots of fascinating stories about life in World War 1 Oxford were discussed with local historian Dr Malcolm Graham. Malcolm also explained how Oxford literally became a ‘Garrison Town’ during this time.  Military historian Stephen Barker presented some poignant accounts of Oxfordshire soldiers through personal artefacts, diaries and photographs – all very powerful stuff.  Dr Jane Potter helped illuminate the story of three Oxford women who recorded and reflected their WW1 experiences through poetry. Thanks also to Dr Adrian Gregory,  Director of  Oxford University’s Globalising and Localising the Great War project, who helped us picture what life was like in Britain in 1914. We couldn’t have asked for a better start to our project! 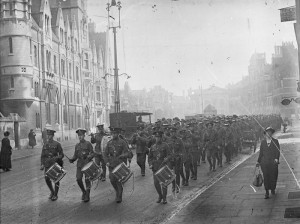 Cadets headed by a band marching through the Broad Oxford. [Public domain], via Wikimedia Commons

Over the course of the next few months, under the guidance of heritage professionals, our volunteers will continue to explore these themes in local archives, museums and online collections. Their mission will be to interpret the story of young people living in these times through photography and text. The creative choice will be theirs to pursue and develop and mentoring sessions with professionals will help guide their work. In 2016 we will run training sessions on stills photography and exhibitions to arm ourselves with tools to publicly present our work to a professional standard.

Finally thank you to the Heritage Lottery Fund grant who have given us this opportunity to introduce a new generation to this aspect of wartime history, and to keep the legacy, memory and significance of the Great War alive for the younger generation.

Oxford Images of World War 1 is organized by Fete Day Ltd and hosted by the Oxford Castle Quarter.

If you are interested in getting involved in the project as a volunteer, a mentor or would just like to find out more please contact Ameneh Enayat, fetedaycontact@gmail.com. 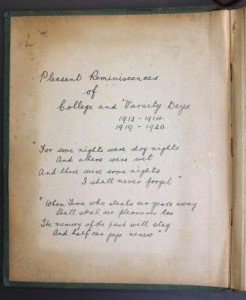 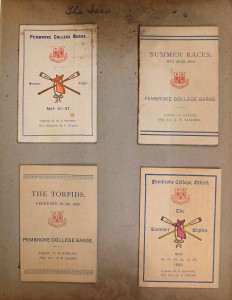