Writing up his journal from notes made in Cabinet on the reverse of Foreign Office telegrams, Harcourt reports that ‘Germany is short of 30-40% of wheat supply.’ He writes that the Lord Chancellor, Viscount Haldane, spoke at length regarding the crisis in Europe. Haldane argued that the German ambassador, Prince Lichnowsky, should be informed that the observance of Belgian neutrality was a ‘deciding factor’ for Britain and that British neutrality should be promised ‘if France not invaded.’ Harcourt adds that the Foreign Secretary, Sir Edward Grey, has still not provided any committment to the French ambassador Paul Cambon.

Harcourt describes the attitude of Winston Churchill, First Lord of the Admiralty, as ‘very violent’ and that Churchill is pushing ‘to mobilise the whole navy.’ The Prime Minister, H.H. Asquith, responded by saying that there would be ‘no proclamation before Monday.’ Harcourt notes that Foreign Secretary Grey supported Churchill’s stance.

The Cabinet decided that a dreadnought battleship being built in Britain for Turkey should not be allowed to leave. The Cabinet also discussed a message from the German Emperor, Belgian telegrams, Italian neutrality and the suspension of the Bank Act. Harcourt writes that Churchill made a long speech on tactics to which the Chancellor of the Exchequer, David Lloyd George, replied.

At 2:00 pm a meeting of the Cabinet Commitee was held in the Board Room at the Treasury. The Governor of the Bank of England, along with his Deputy and others, were informed that the Cabinet had decided to bring forward a Moratorium Bill on Monday to suspend all standing orders. The bankers requested to be allowed to deposit £15 million of gold and £30 million of securities in the Bank of England and to receive £45 million of notes in exchange.  Harcourt writes that the committee agreed but notes that ‘the B[an]k of England were very obstinate.’

The Admiralty has requested the authority to begin the ‘examination of all ships in defended ports.’ The Prime Minister has approved this and Harcourt, as Colonial Secretary, has telegraphed the orders to the British dominions and colonies. The state providing insurance for shipping in respect of  war risks is now being considered. 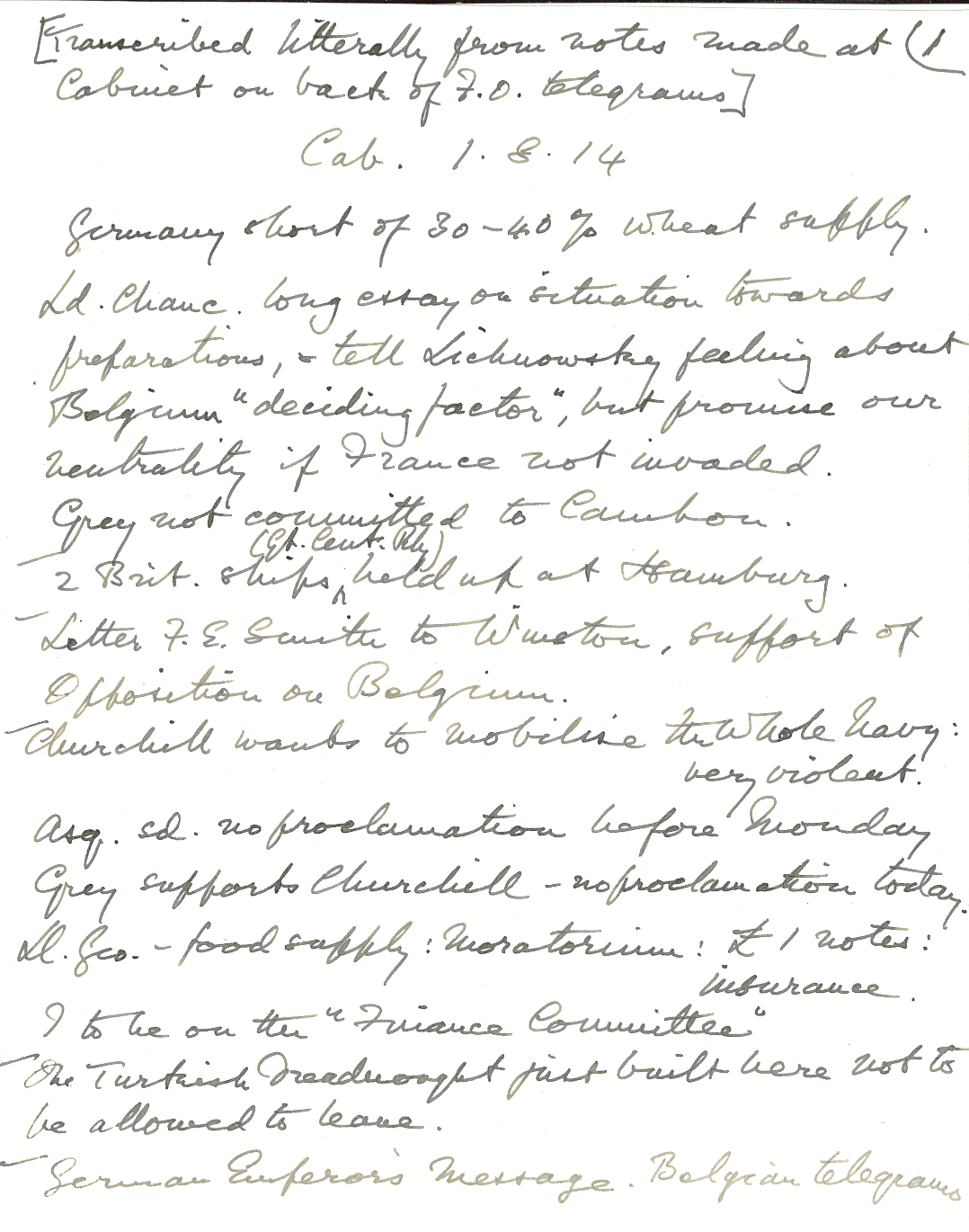 Entry for 1 August from the political journal of Lewis Harcourt (page 1). 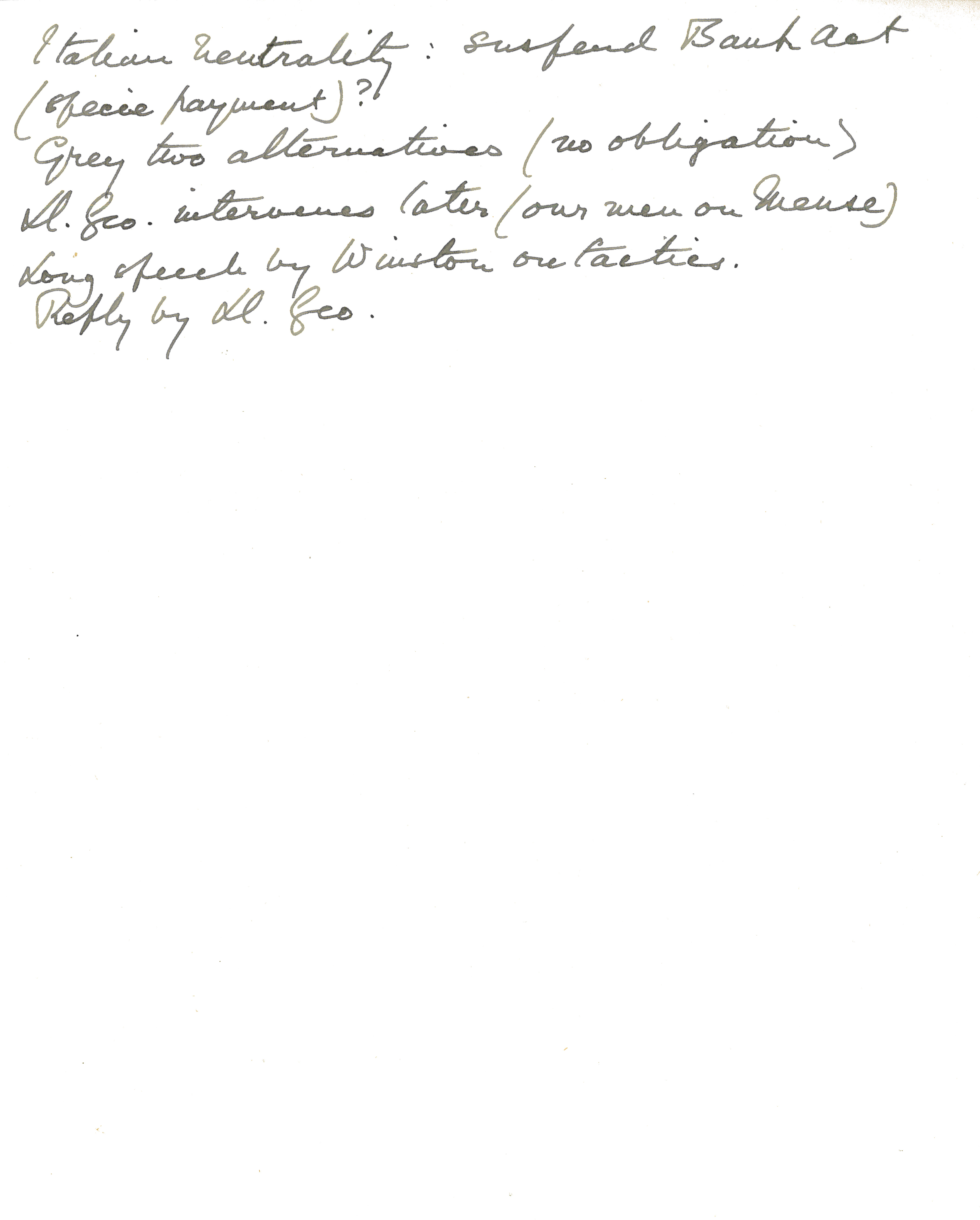 Entry for 1 August 1914 from the political journal of Lewis Harcourt (page 2). 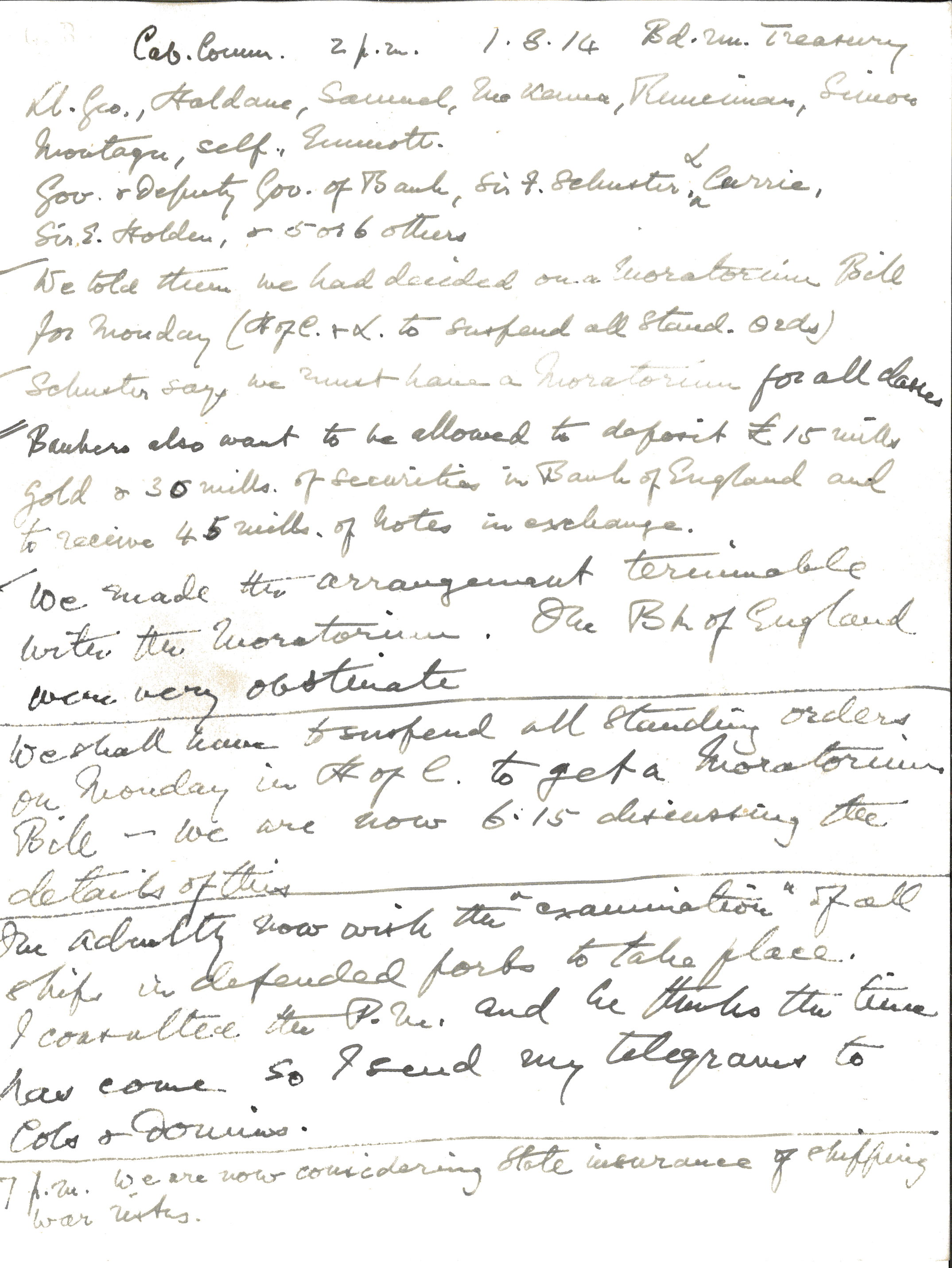 Entry for 1 August 1914 from the political journal of Lewis Harcourt (page 3).