Harcourt continues to be active in the peace party. At midnight Simon and Illingworth visit his London home, 14 Berkeley Square, to ask him to join a delegation to Lloyd George at 11 Downing Street in the morning. At the meeting they agree they ’w[oul]d not go to war for mere violation of Belgian territory’, and that they would try to hold up any decision about British intervention.

Harcourt and Lloyd George go to 10 Downing Street to convey the views of the peace party to the Prime Minister at 11 a.m. Asquith listened, but ‘s[ai]d nothing.’ The Cabinet meets immediately after this, and approves the emergency financial arrangements discussed in earlier meetings, and also the war risk shipping insurance scheme. News arrives that Germany has declared war on Russia, and that German troops have invaded Luxembourg. At this stage it seems that they might be avoiding Belgium.

The German ambassador (Lichnowsky) has seen the Prime Minister, and in tears told Asquith that he believed it would be Germany that ‘is going to be crushed’ and not France. He thinks his government ‘mad.’ The Foreign Secretary Grey had seen Cambon, the French Ambassador, who was also in tears. Grey informs the Cabinet that he has told Cambon that Britain has made no decision about her action if Belgian neutrality should be violated, or the German fleet should come into the Channel. However, he wants to be able to reassure Cambon that if the German fleet attacks the French coast, Britain will intervene with her navy. He wants to be able to make a statement to this effect in Parliament tomorrow. The Cabinet decides that nothing should be said on these matters to Cambon today, though Grey wants to make this promise to France today, and is ‘much stronger than before for joining in war.’

As the Cabinet sits, a letter arrives from Andrew Bonar Law, leader of the Opposition, offering support if Britain should go to war, and stating that ‘it w[oul]d be fatal to the honour and security of the U.K. to hesitate.’ Winston Churchill says he will resign if Britain does not go to war on the violation of Belgian territory; John Morley says he will resign if Britain does go to war. John Burns announces his intention to resign over Grey’s plan to use the fleet to defend the French coast. He is asked to hold off until the evening Cabinet meeting.

In the afternoon, the peace party meet for lunch at Lord Beauchamp’s house in Belgrave Square. Many are angry that they are being pushed into decisions too quickly, and Simon thinks they ought to have resigned. Harcourt disagrees as he now believes that ‘a German fleet attack & capture of French territory’ on the Channel coast is ‘a British interest.’ The party agree that a German traverse of Belgian territory was not a cause for war, but that occupation or a threat to Belgian independence was a ‘vital Brit[ish] interest.’

The Cabinet meets again at 6.30 p.m. Grey has told Cambon that no British decisions have been made, and Cambon has accepted this ‘quietly’. Churchill has met the French naval attaché, and has arranged to ‘open “the joint naval signal books”’, a decision that angers Morley who says that this was an ‘attempt to create an alliance for war.’ Grey says he will not inform Germany about the decision to intervene against a German fleet attack on the French coast. Some of the Cabinet feel this is a mistake. It is now clear that the Germans have entered French territory via Luxembourg. Simon asks Churchill ‘if any orders given to attack German fleet if they come out tonight.’ Churchill says ‘definitely “No.”’ Harcourt says ‘it w[oul]d be monstrous to attack them if they were coming out not ag[ain]st us and without having been informed of our decision.’

John Burns says he must resign as nothing has changed.

As Colonial Secretary Harcourt receives a letter at 10 p.m. from the Admiralty suggesting placing a South African garrison and guns in Walfisch Bay in German West Africa. He rushes to McKenna’s house where the Prime Minister is dining to persuade him that this scheme is ‘mad’ and that such a position ‘w[oul]d be eaten up by Germans in an hour.’

Arthur Ponsonby visits Harcourt at 11.30 p.m. to ask how the peace party is getting on. He tells Harcourt that the peace M.P.s are split – ‘many of them think the violation of Luxembourg vital!!! Not one memb[er] of Cab[inet] (not even Grey) attaches any importance to this!!’ 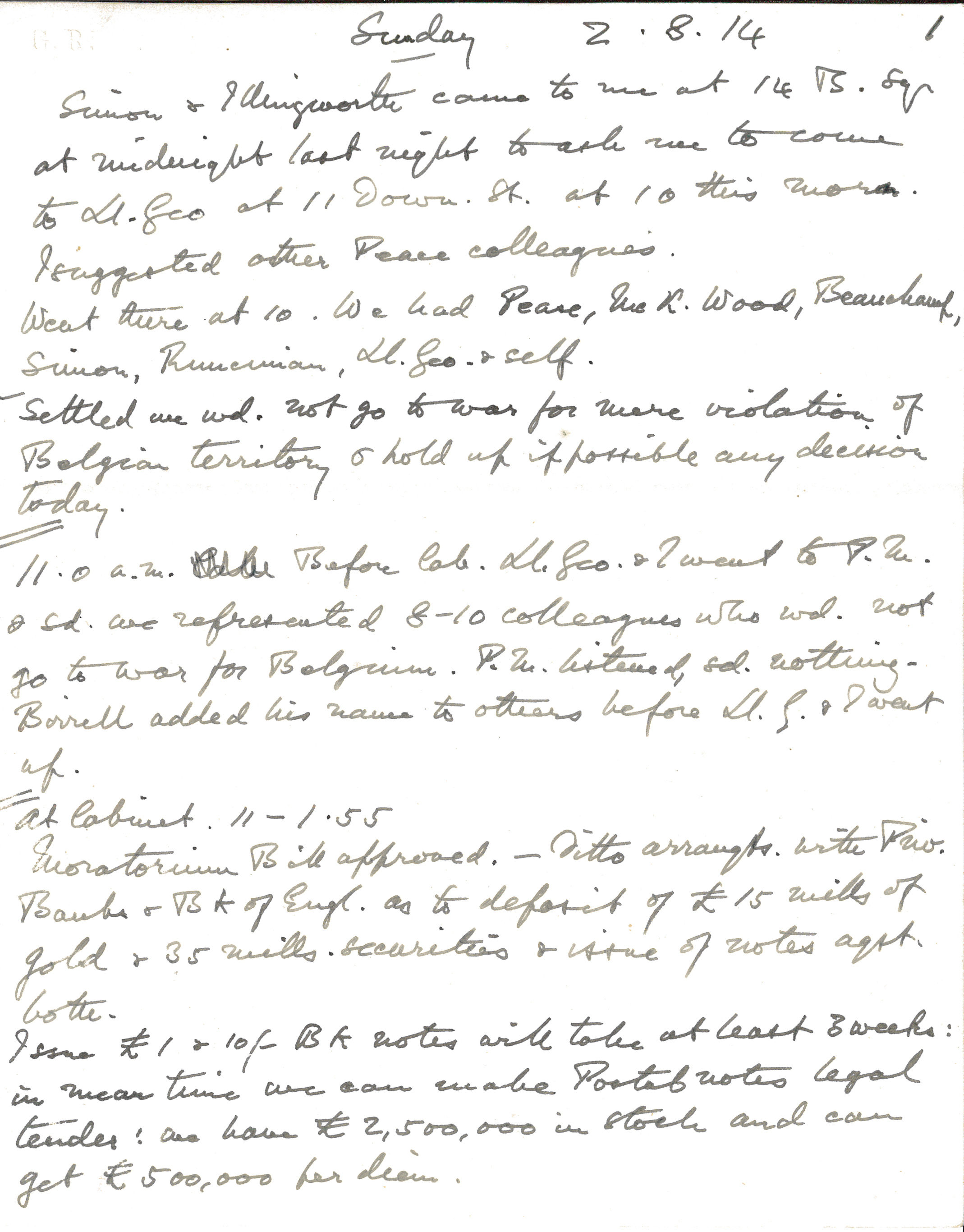 Entry for 2 August from the political journal of Lewis Harcourt (page 1). 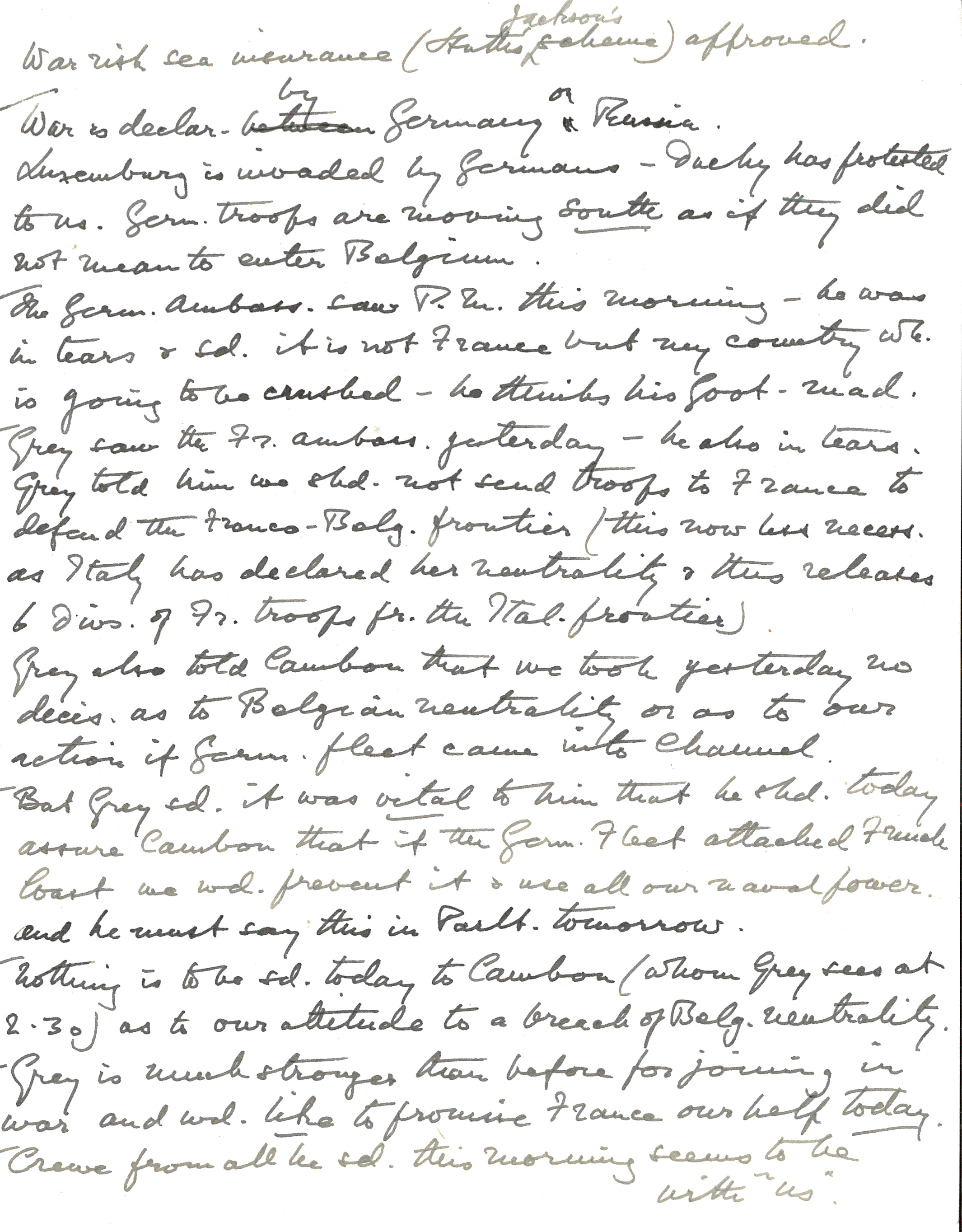 Entry for 2 August from the political journal of Lewis Harcourt (page 2). 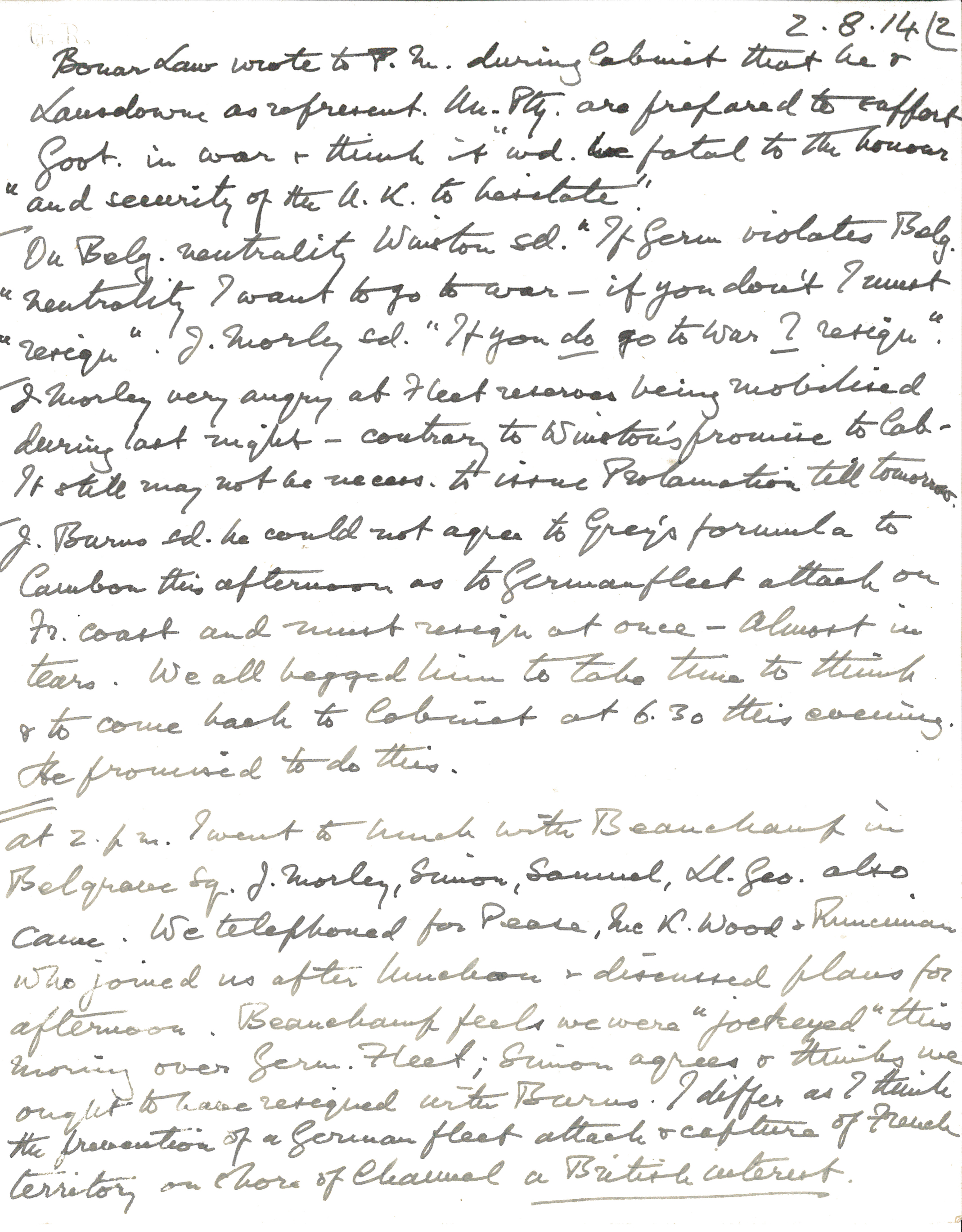 Entry for 2 August from the political journal of Lewis Harcourt (page 3). 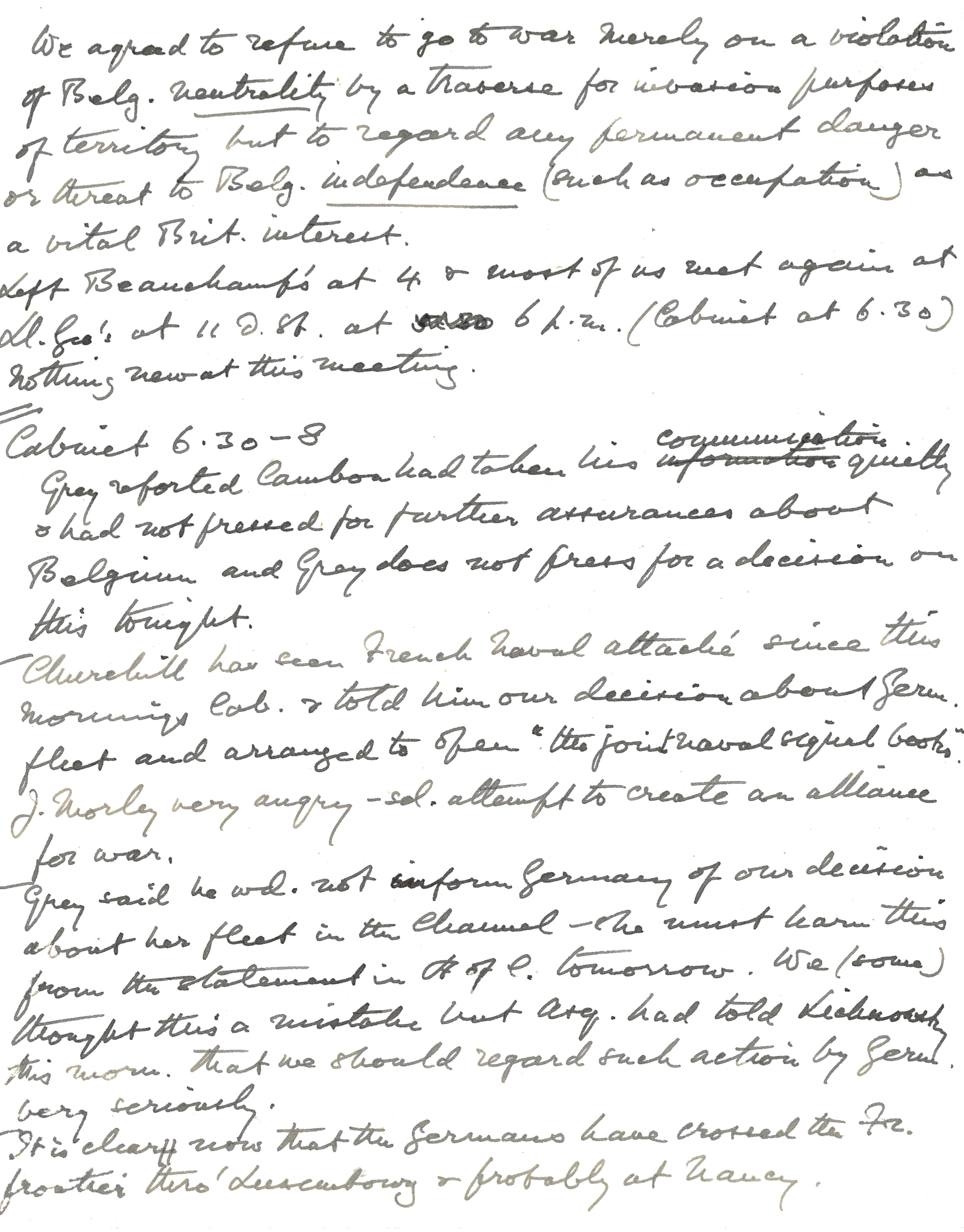 Entry for 2 August from the political journal of Lewis Harcourt (page 4). 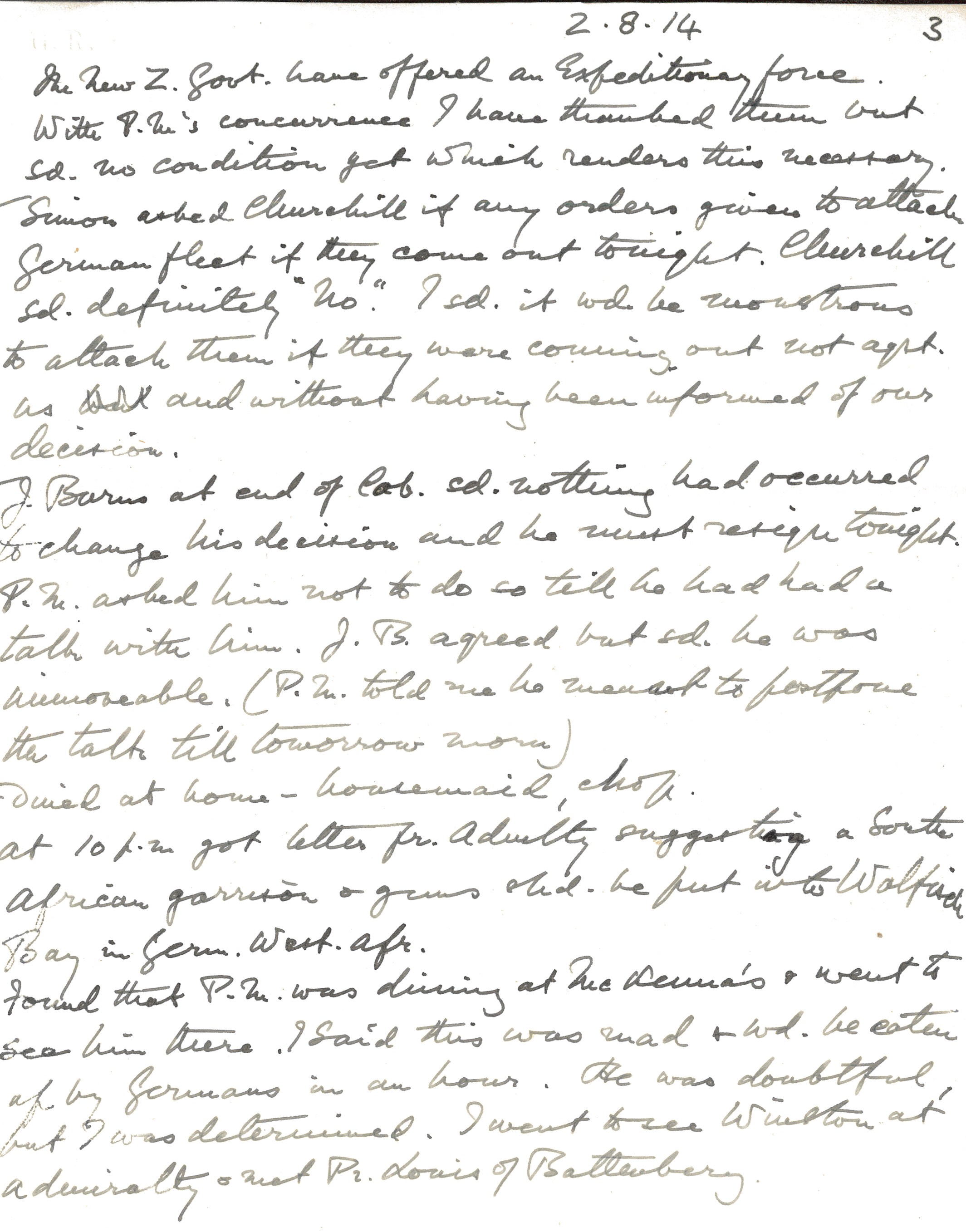 Entry for 2 August from the political journal of Lewis Harcourt (page 5). 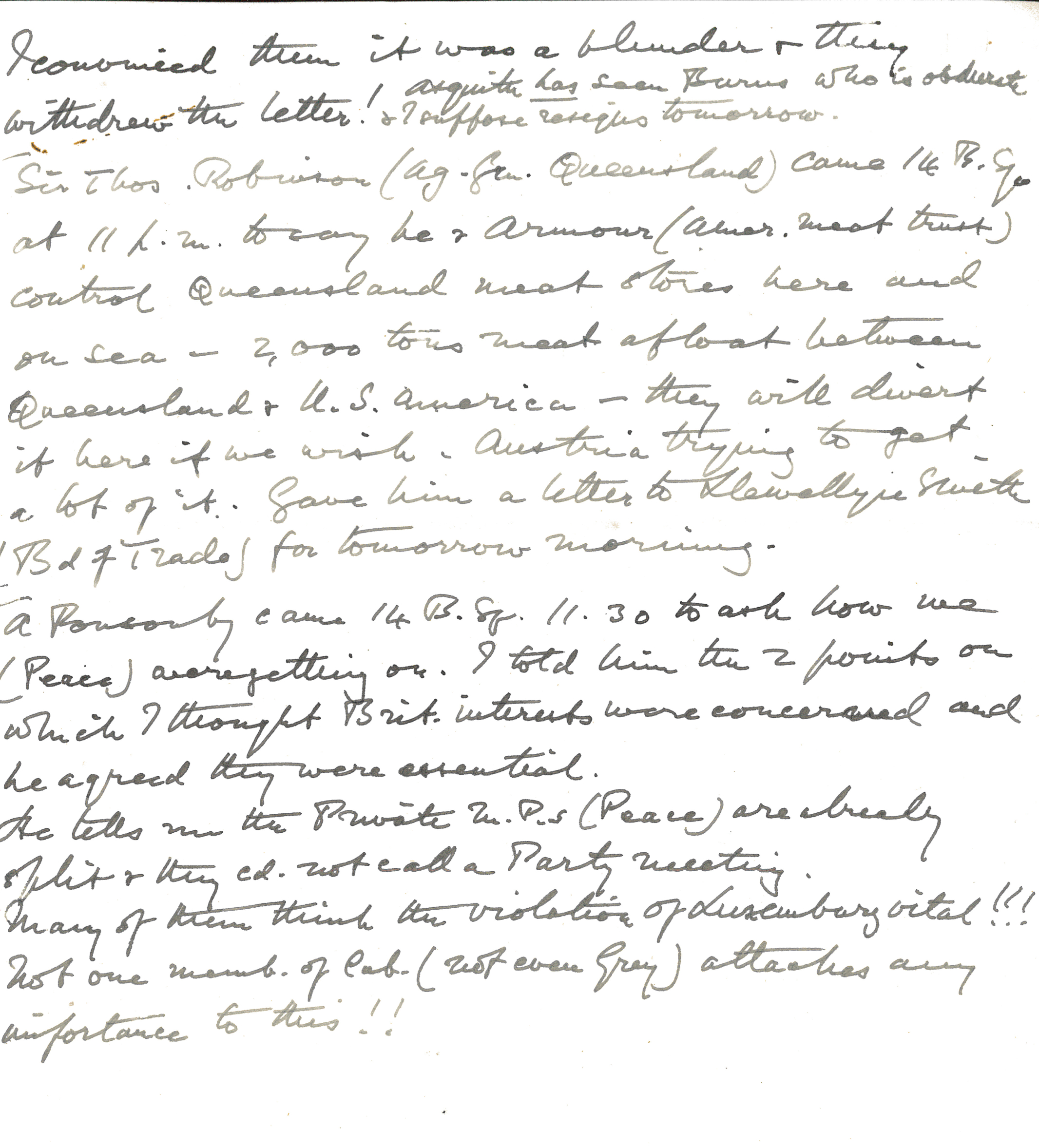 Entry for 2 August from the political journal of Lewis Harcourt (page 6).