The Cabinet meets in the morning. Burns and Simon have resigned and Morley is ‘probably going.’

Belgium has received ‘demand from Germany for neutrality & has categorically refused. Germans concentrating at Liege.’ Grey says: “We must support Belgium & France”.

The leaders of the Conservative and Unionist opposition can see the logic of Burns’s position: ‘they agreed with Burns, fleet proclamation is a declaration of war.’

It appears that Germany has ‘offered Belgium neutrality if they allow passage of German troops.’ The German ambassador Lichnowsky has stated that Germany will not attack the French coast with its fleet, but ‘Grey does not think Lichnowsky authorised to say this.’

Asquith says that it is now necessary to mobilize the army, ‘not for Expeditionary force, but for home safety & defence.’.

A committee is appointed to deal with food supplies. The Cabinet debates extending the Bank Holiday for two days, and using postal notes for a few days whilst waiting for £1 & 10/- notes to be issued. There is fear that ‘there may be a run on P.O. Savings Bank £150 mill[ion]s.deposits.’

Asquith is in a sombre mood, and tells the Cabinet that the Cabinet’s authority is ‘ much shattered’ by the resignations, and that he fears Labour and the Irish will oppose him. He feels that he might have resigned, but he cannot see how any government could form with a majority in the House of Commons. He ‘dislikes and abhors a coalition – experiment none w[oul]d. like to see repeated.’ He will not ‘separate from Grey’; he feels that a continuance of the present government ‘remains in best interest of the country’ though it is a ‘most thankless task to me to go on.’

Simon states that ‘“if country at war it was the duty of men like himself and the Peace party to support the Govt.”: he broke down.’

The Cabinet resumes at 6 p.m. The German ultimatum to Belgium has come in: ‘very stiff.’

Churchill says “the Fleet will be absolutely ready by 4 a.m. tomorrow”.

Asquith says that ‘Army mobilisation will be completed by Sunday – we have 3 days more.’

Grey is to telegraph to Germany tomorrow morning to demand an answer over their ultimatum to Belgium.

Colliers in South Wales are said to have gone on strike as they ‘won’t dig coal for War.’

Asquith is hopeful that Simon may not resign after all.

The Cabinet decides that Lord Buxton should take up his post as Governor-General of the Union of South Africa, and sail in spite of the risk of capture. 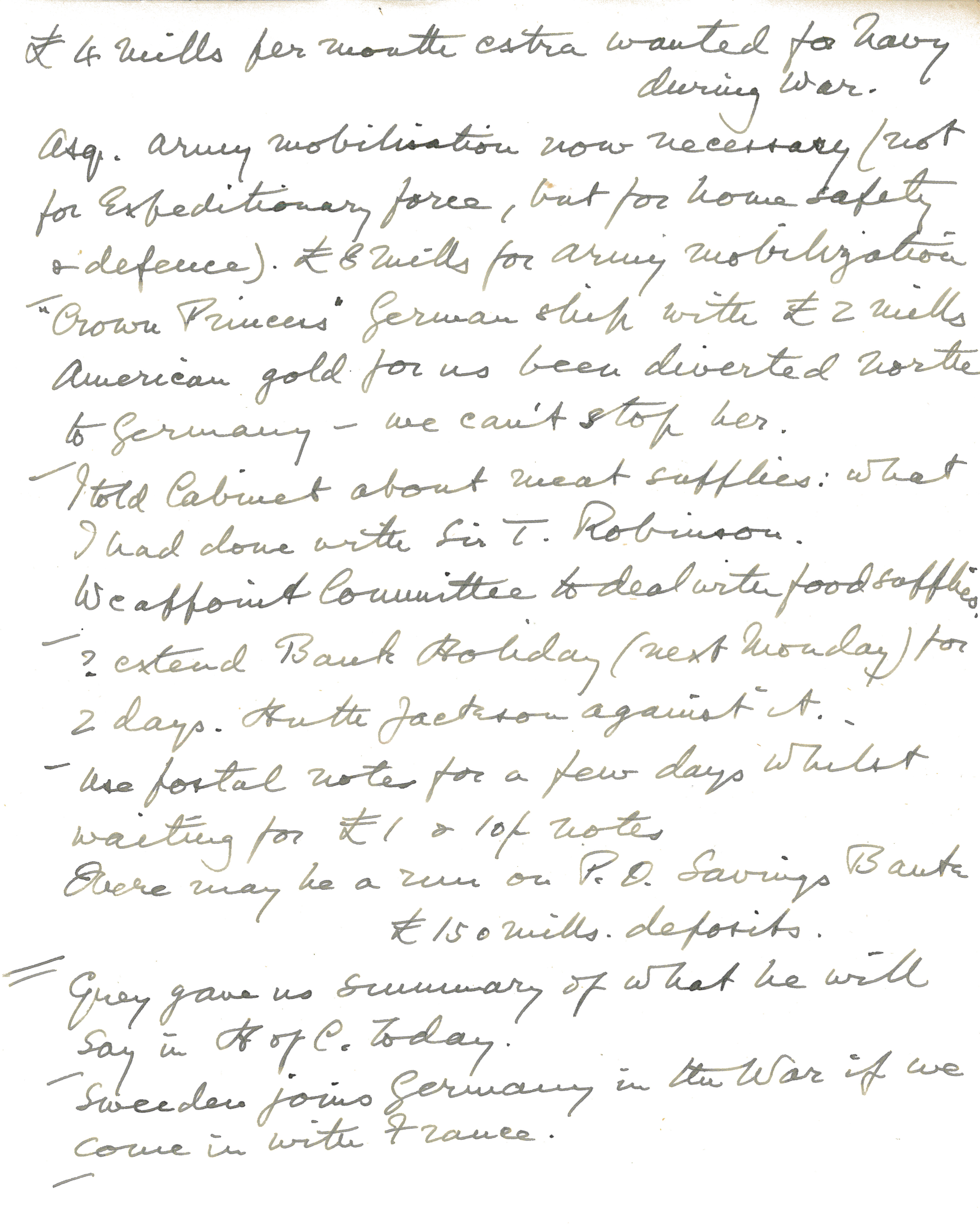 Entry for 3 August from the political journal of Lewis Harcourt (page 2). 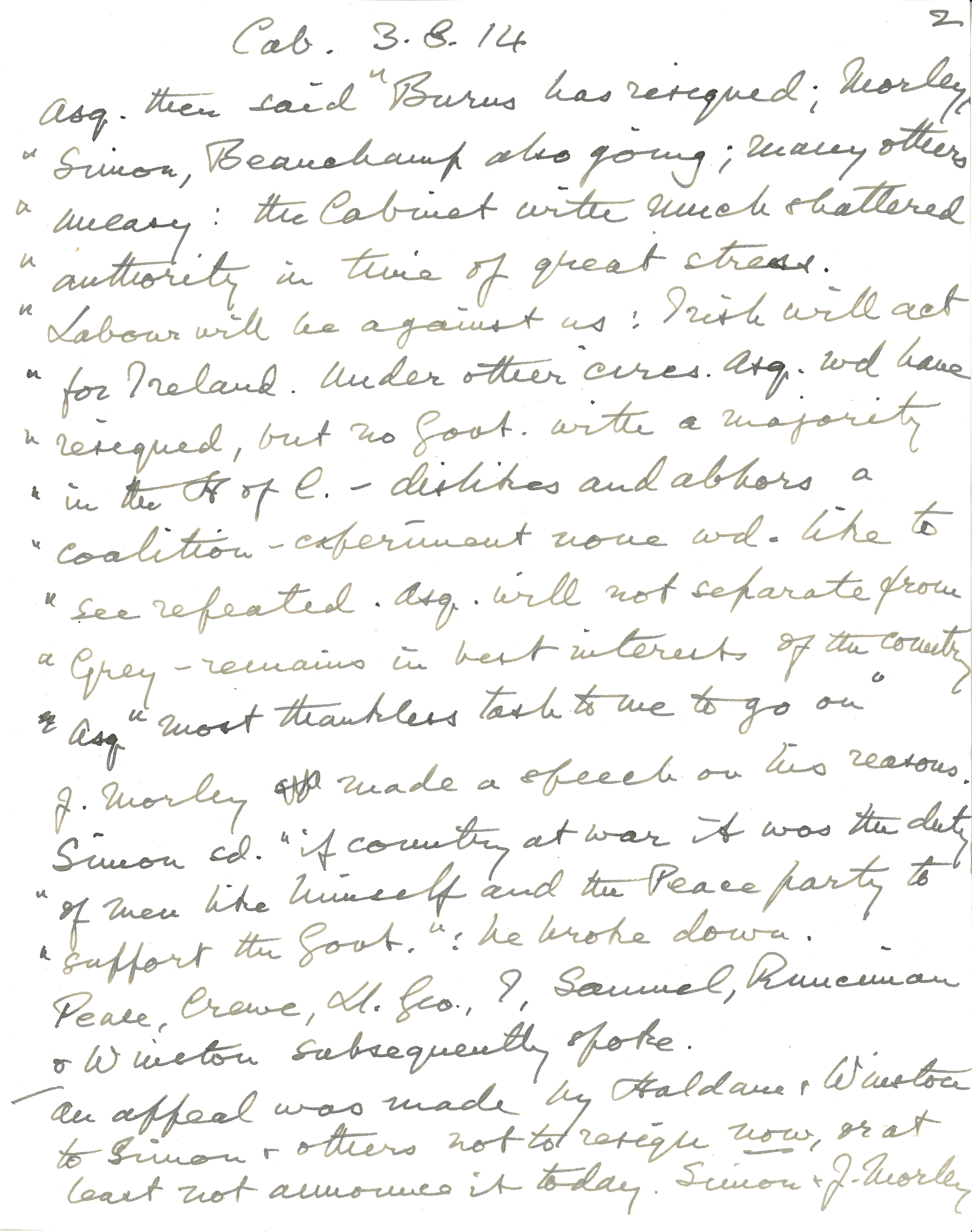 Entry for 3 August from the political journal of Lewis Harcourt (page 3). 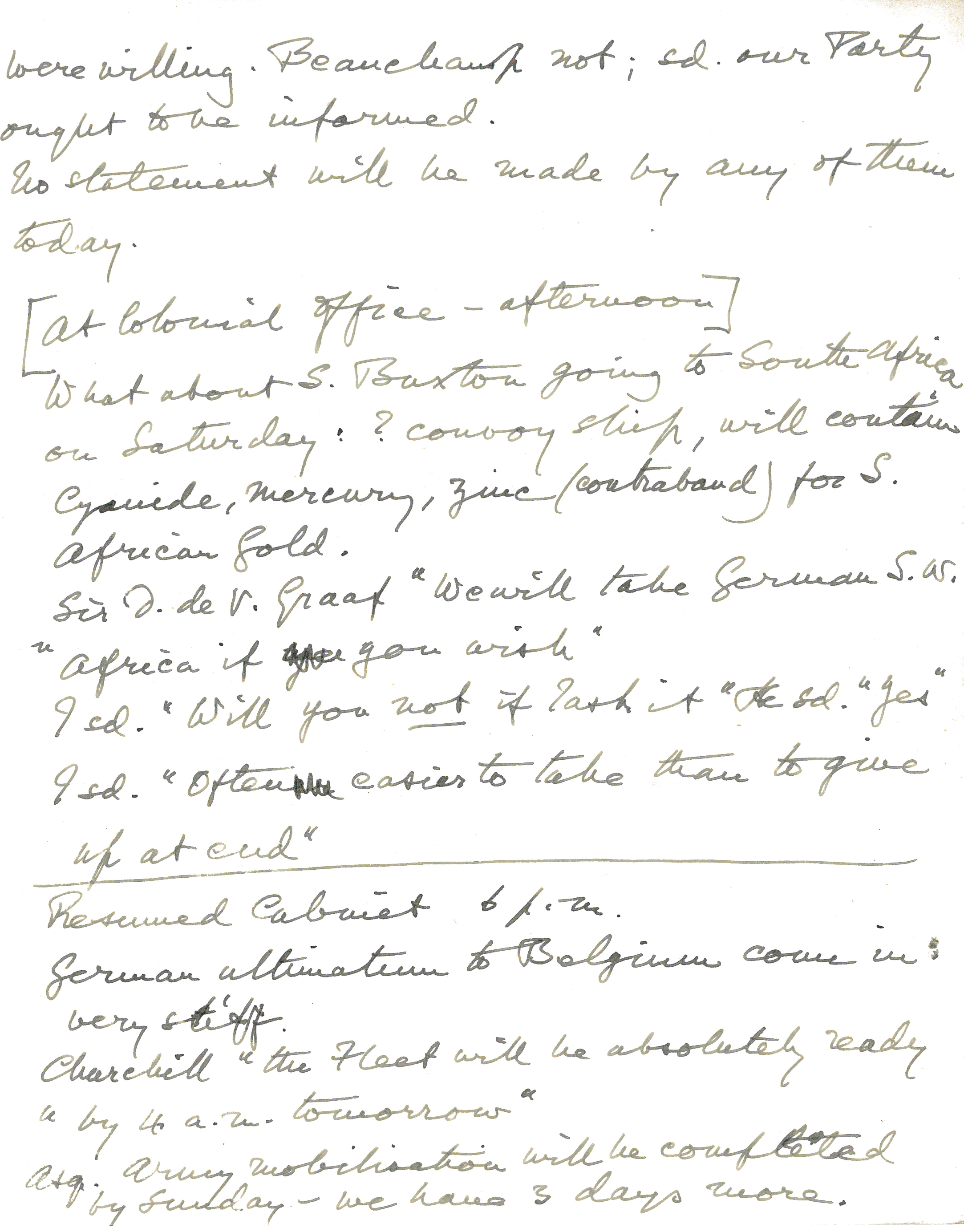 Entry for 3 August from the political journal of Lewis Harcourt (page 4). 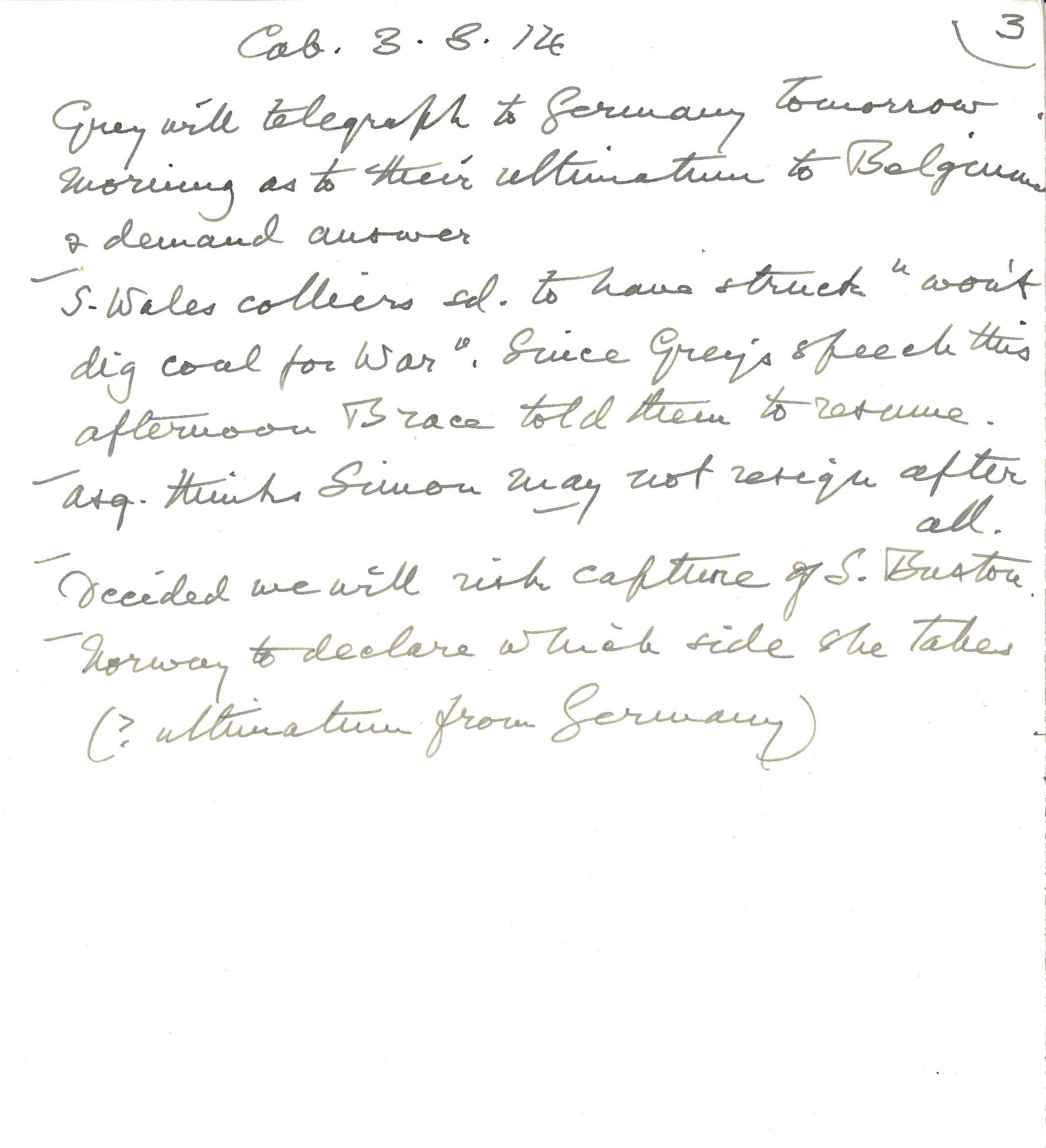 Entry for 3 August from the political journal of Lewis Harcourt (page 5).