The London Stock Exchange has been closed until further notice. The Foreign Secretary, Sir Edward Grey, informed the Cabinet of his meeting the previous day with the French ambassador, Paul Cambon. Grey told Cambon that he was unable to answer about British support for France without consulting the Cabinet. Harcourt writes that Grey ‘proposed to tell him this afternoon that present Eng[lish] opinion w[oul]d not support our participation. If Belgium violated, might change public opin[ion] but in any case we could never promise assistance without assent of the H[ouse] of Commons.’ Grey is to meet Cambon again later in the afternoon and assured the Cabinet that he would ‘make no promise as to our action in hypothetical circ[umstance]s.’

Harcourt reports that the Chancellor of the Exchequer, David Lloyd George, has been gauging business opinion on the developing European crisis. The Bank of England and the City are said to be ‘aghast’ at the possibility of Britain being dragged into a conflict. One businessman predicted to Lloyd George that if Britain entered a European war there would be ‘wholesale unemployment, population starving’ and ‘England will be in revolution in a week.’ Harcourt notes that Lloyd George was ‘very eloquent ag[ain]st our participation & impressed Cabinet.’ However, Harcourt continues to believe that because Lloyd George ‘depends on public opin[ion] he may wobble over again in 2 days.’

Harcourt is now confident that ‘this Cabinet will never join this war’ although he notes that ‘several colleagues are uneasy on the subject of our treaty obligations to Belgium.’ His confidence is reinforced with news received in the morning that Austria and Russia have ‘begun talking again.’ Grey is proposing to meet the German ambassador, Prince Lichnowsky, and ‘to suggest that Berlin should get Vienna to make some reasonable offer to St Petersburg and then if Russia proved unreasonable it might give us ground to wash our hands of Russia or to secure Russian acceptance of offer.’

Harcourt reports that Winston Churchill, First Lord of the Admiralty, was ‘very angry’ that the Cabinet rejected his wish to instigate a plan devised by the Committee of Imperial Defence for national war shipping risk insurance. Churchill’s hiring of the Cunard ship Acquitania and commandeering of South Wales coal yesterday have both been cancelled.

The meeting of the Cabinet concluded at 1:00 p.m. following further discussion of the situation in Ireland. The Prime Minister, H.H. Asquith, told all ministers that they must not go far from London.

In the afternoon, Harcourt reports that the European crisis is ‘suddenly much worse.’ Russia has fully mobilised both its army and navy. Germany has declared itself to be ‘in a state of war’ and that ‘either she or France may strike tonight.’

The Bank rate has been put up to 8% and there has been a ‘considerable run on Banks for gold from depositors.’ The Prime Minister had an audience with the King between 3:15 and 4:00pm in the afternoon and then met with the Governor of the Bank of England. 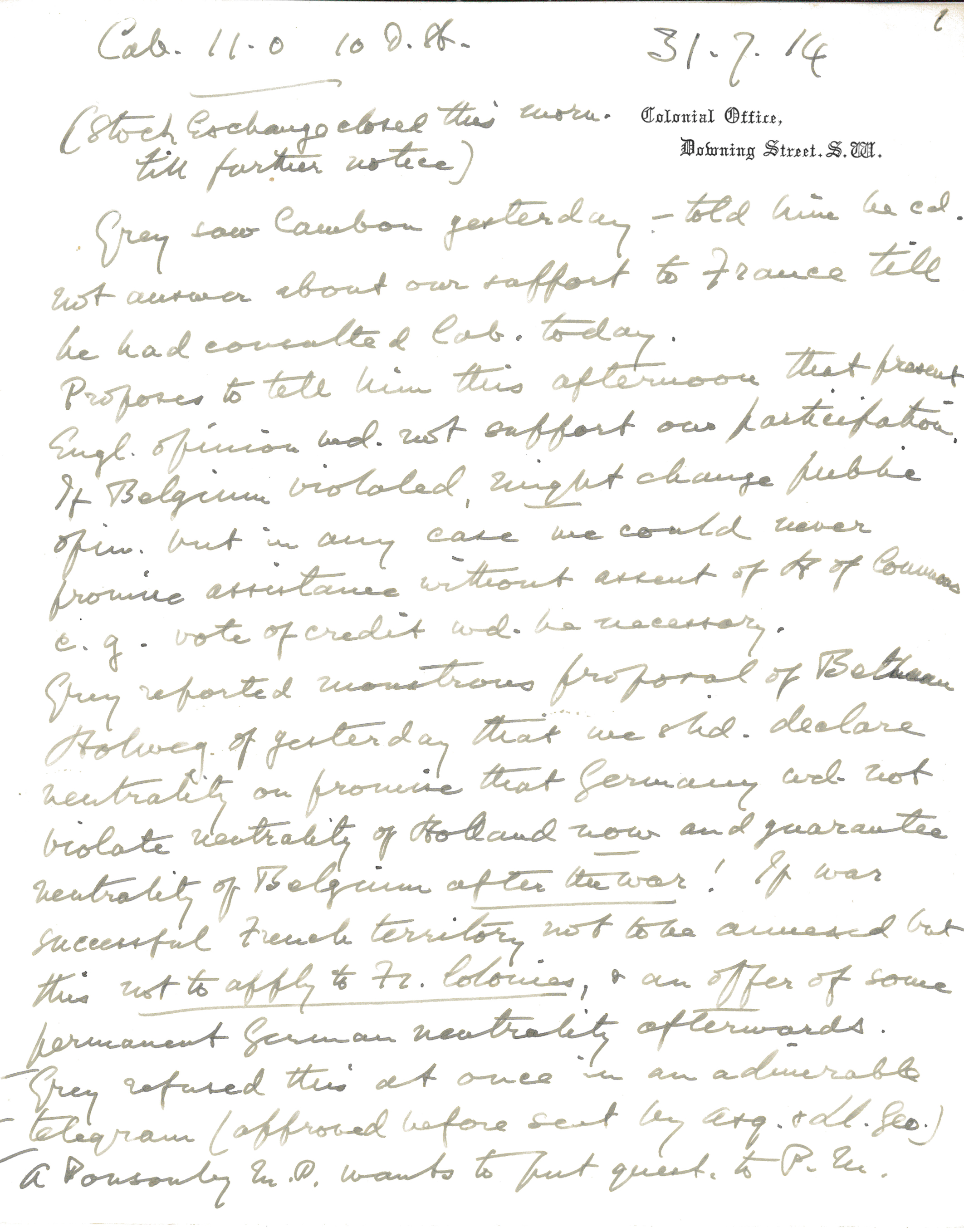 Entry for 31 July 1914 from the political journal of Lewis Harcourt (page 1). 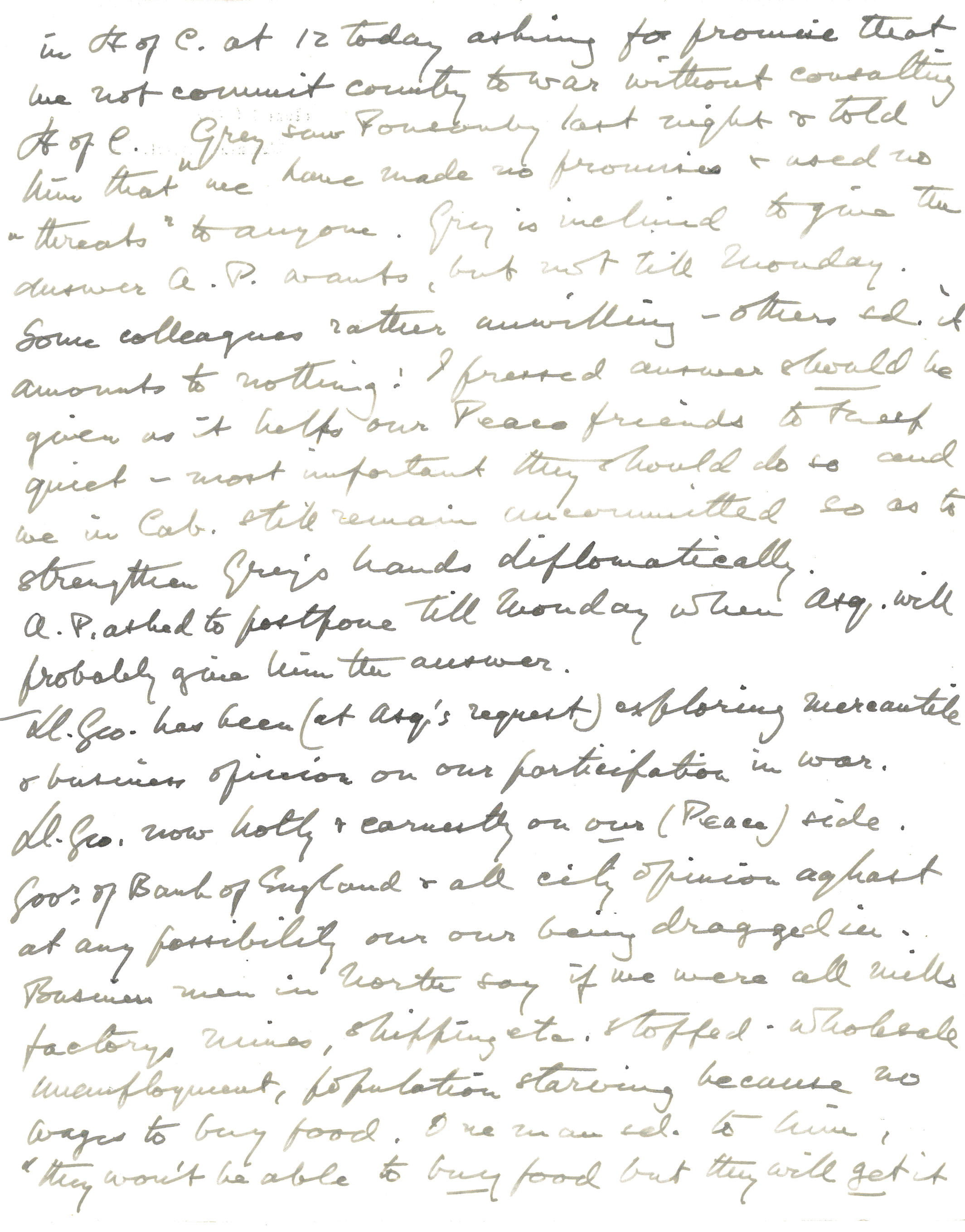 Entry for 31 July 1914 from the political journal of Lewis Harcourt (page 2). 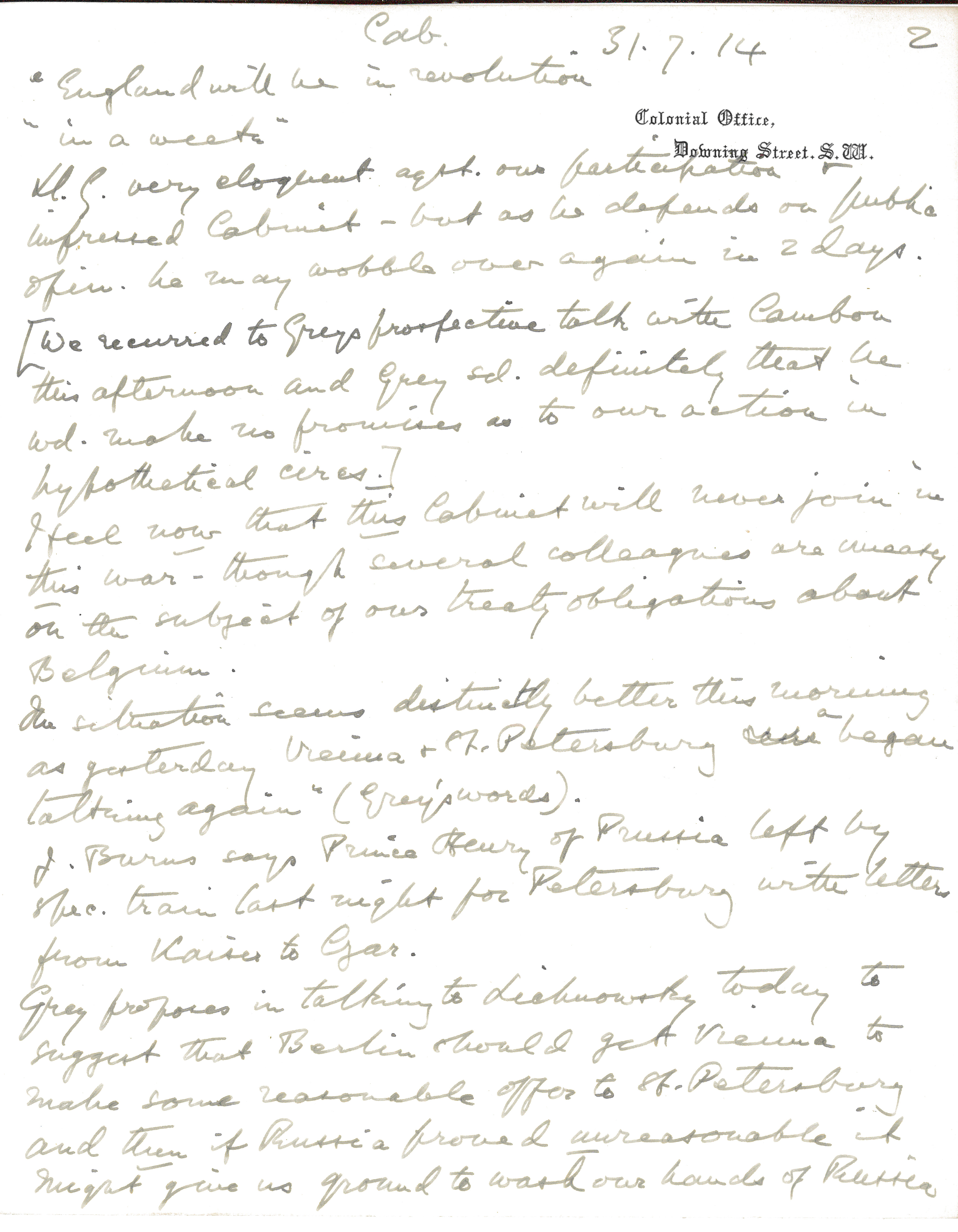 Entry for 31 July 1914 from the political journal of Lewis Harcourt (page 3). 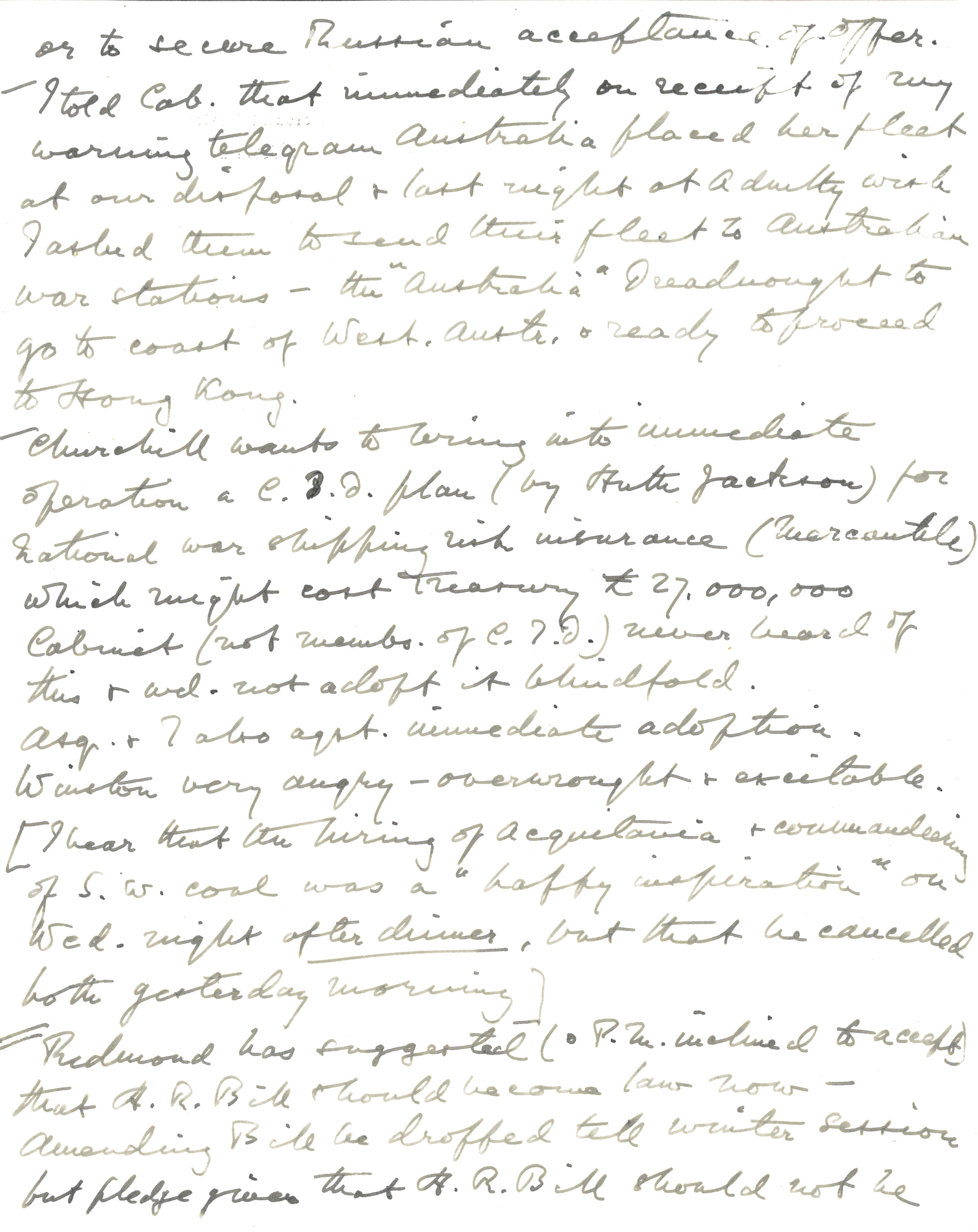 Entry for 31 July 1914 from the political journal of Lewis Harcourt (page 4). 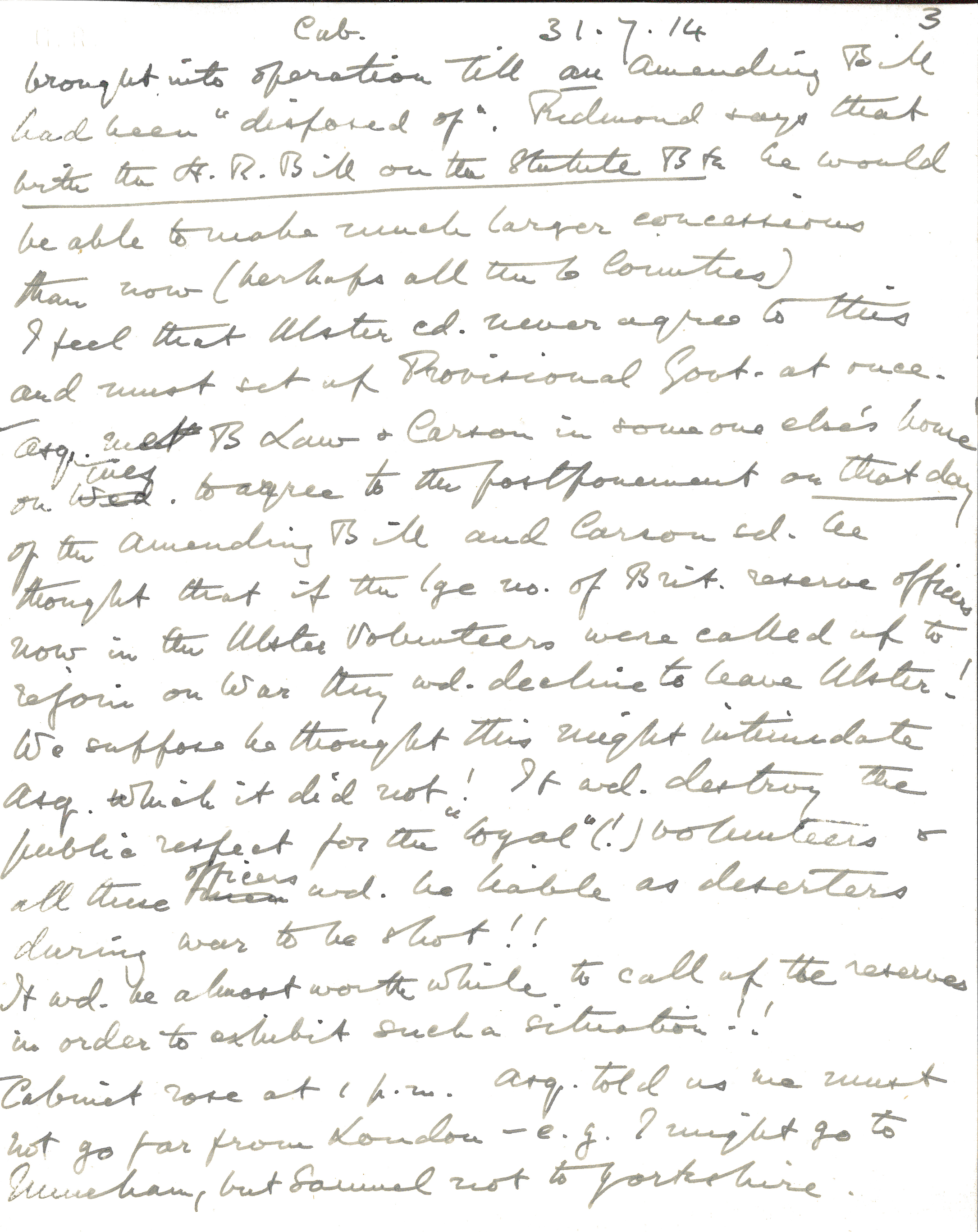 Entry for 31 July 1914 from the political journal of Lewis Harcourt (page 5). 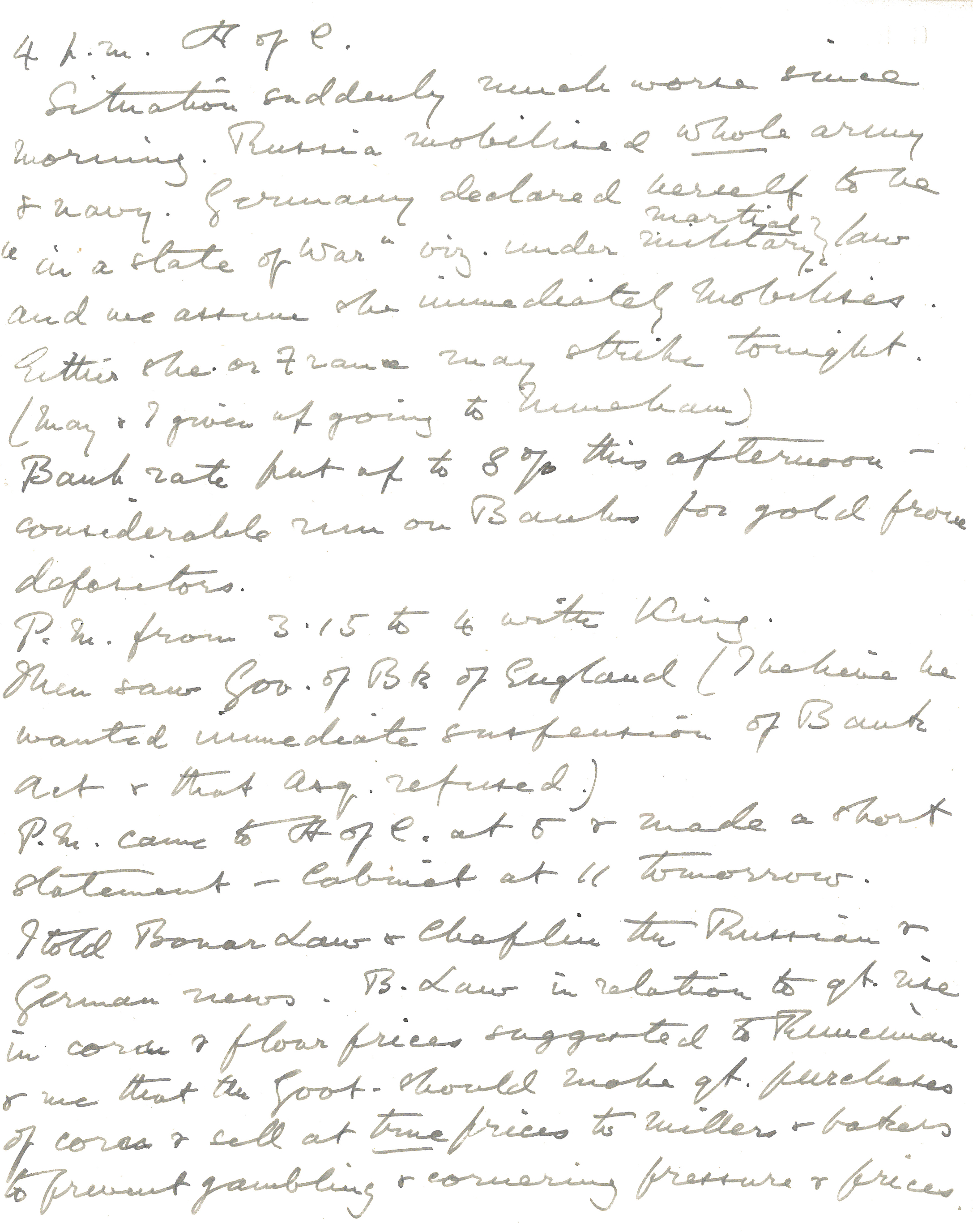 Entry for 31 July 1914 from the political journal of Lewis Harcourt (page 6).